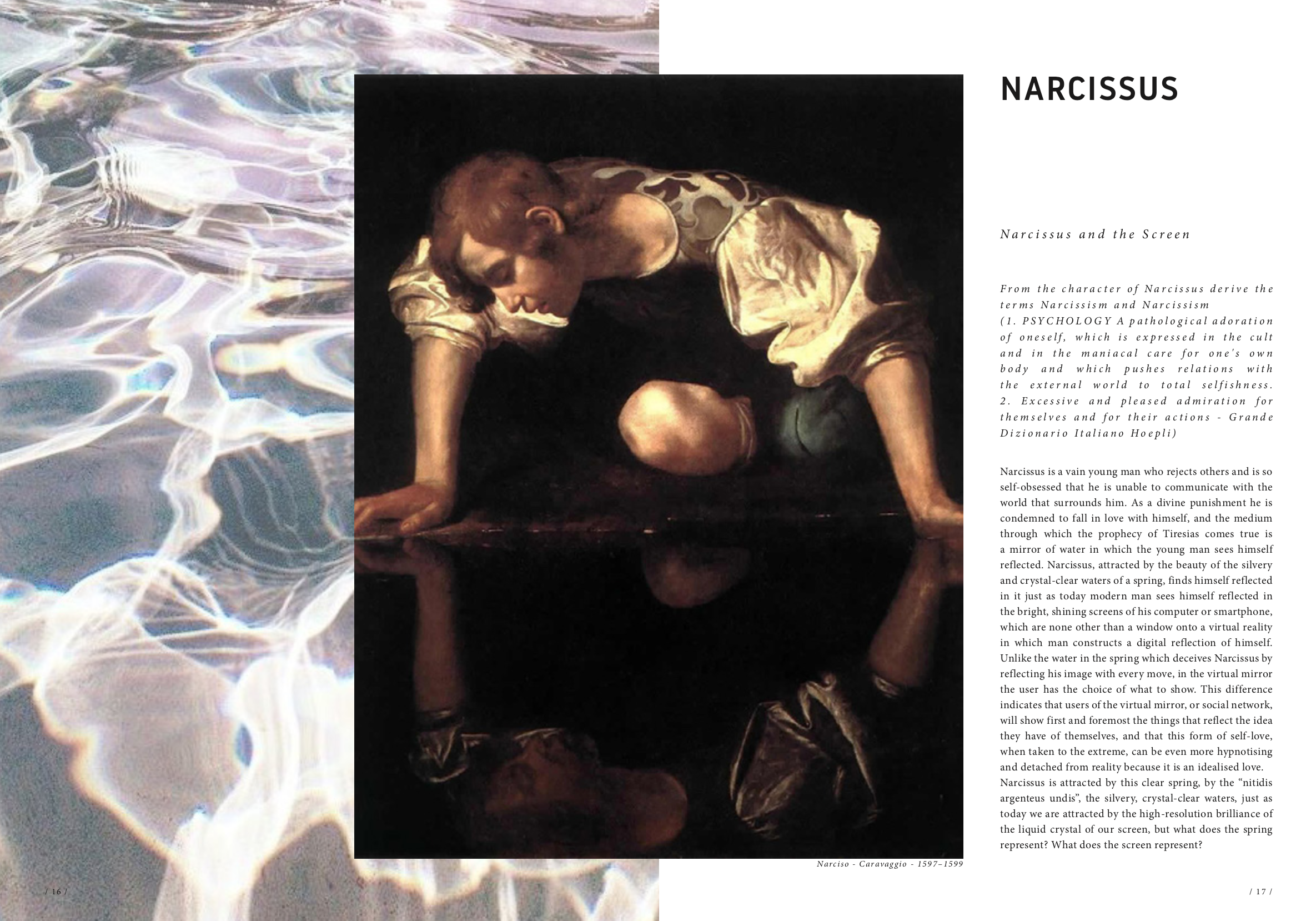 “During the mechanical ages we had extended our bodies in space. Today, after more than a century of electric technology, we have extended our central nervous system itself in a global embrace, abolishing both space and time as far as our planet is concerned. Rapidly, we approach the final phase of the extensions of man – the technological simulation of consciousness, when the creative process of knowing will be collectively and corporately extended to the whole of human society, much as we have already extended our senses and our nerves by the various media.”
Marshal Mc Luhan, Understanding Media – Introduction, London, 1964.

The “Metamorphoses” (originally published in 8 A.D.), the “poem of transformations”, the most important work of Ovid, explores the myths of the history of humankind. It is made up of around 250 stories that tell of events involving metamorphoses, or transformations, events in which men, gods and mythological creatures, as well as nature itself, are equally involved. The hybridizations of the Metamorphoses are pervaded by love, a love that is often suffered rather than felt, blind and irrational. This love leaves the figures involved tormented and leads them to find in metamorphosis their only possible form of liberation, which all too often turns out to be a prison. Thus the central figures of the tales are forced to abandon their own form, their own life, allowing themselves to die, undergoing transformations to become a hybridised version of themselves.
Two thousand years later, in the post-digital era, man has distanced himself from nature, preferring a society in which he has unwittingly become enslaved to the machine, which is often humanised or deified. Technological progress is a process of rapid and continuous transformation, which becomes a modern, universal, high-speed metamorphosis characterised by reductive processes and by the mathematical mechanics of Artificial Intelligence.
The process affects every form of life on the planet; it allows no time for human consciousness, which, dazed, takes refuge in parallel worlds; the screen becomes nothing less than a window onto virtual worlds, in which humans idealise themselves, incapable of diverting their narcissistic gaze from an ideal that has become easy to mould. Taking on this hybrid form, the human leaves indelible traces in data centers, traces that feed the great algorithm of Neoliberalism. From this window, everything seems a game with points to be scored, with options to “like”, “swipe right” or “swipe left”. The speed of it distorts our perception of time: we live in the moment just past, which becomes restrictive and prevents us from living in the present. We live, then, conditioned by the constant reductive judgement of the recent past, losing the value of human relationships and the diversity of languages.
In this short essay I have chosen to take as a model the myth of Narcissus, as told by Ovid in the Metamorphoses, to outline the paradoxes of the post-digital era and how the story can give us a contemporary reading of the characteristics of the man-machine hybrid.
The myth of Narcissus has often been interpreted from a psychoanalytical point of view as a drama about the impossibility of communication: on the one hand the modern world is completely interconnected, while on the other modern-day beings have fallen into a condition of profound internal incommunicability, of which they are often unaware.
In this myth I pick out three significant characters: Tiresias, the prophet; Echo, the nymph who, as the result of a divine punishment has lost the ability to express herself clearly; and Narcissus, who is so in love with his own reflection that he can no longer communicate with the world.
These three characters represent three types of hybridization that characterise today’s world: Tiresias, the prophet, is comparable to the oracle that is Artificial Intelligence; Echo, the nymph deprived of her voice, is the transformation of languages and their extreme over-simplification and hybridization; and Narcissus represents modern man who becomes a hybrid with his own virtual “avatar”.

Please find the full essay at the link below:
META_SPACE_HYBRIDIZATION_ENG 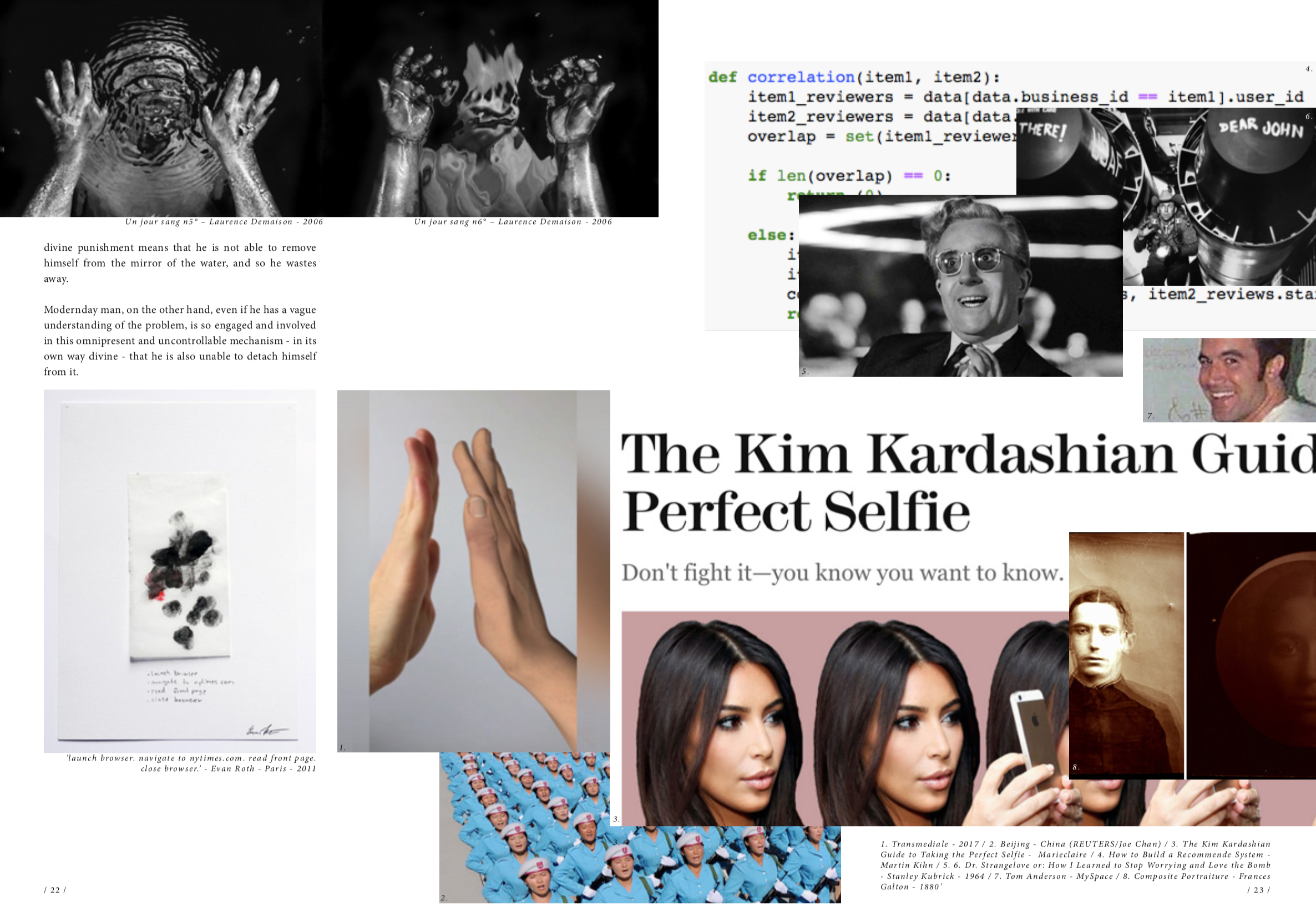